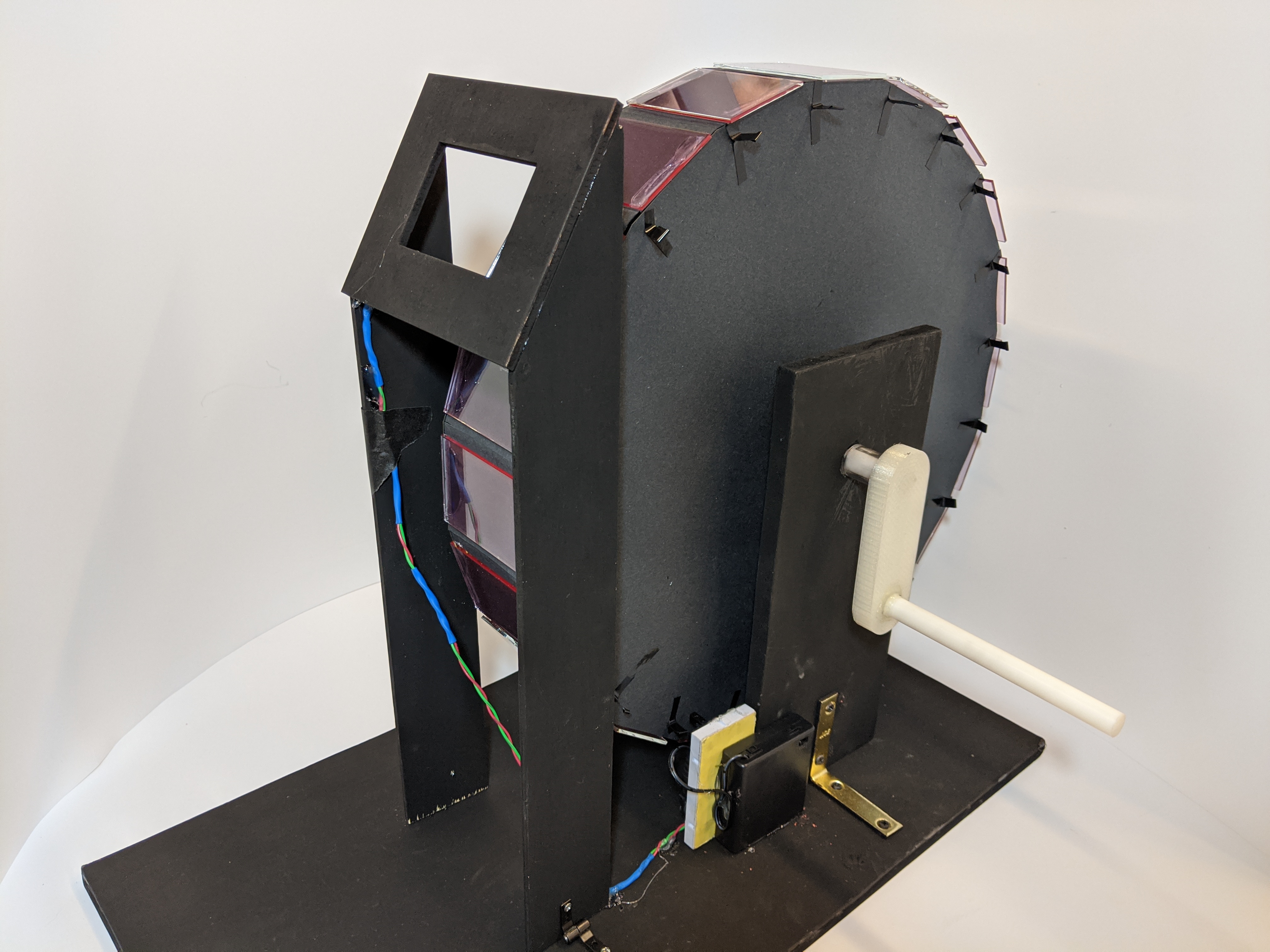 During my first semester at MIT, I took a class called "Sci Fab: Science Fiction Inspired Envisioneering and Futurecrafting" where we developed our own science fiction worlds and then created an artifact derived from that world. This class taught me how to think more creatively and how to effectively manifest those creative thoughts into words, drawings, and a working prototype. The artifact prototyping process itself gave me some good experience with time management on a project that didn't already have the instructions laid out for it.

My science fiction world I created was set in the year 2060, but there are various groups of "neo-Amish" who have been "left behind" by technology. The artifact I present is an attempt at a low-cost holographic video display using fairly common and accessible materials. It is similar to a zoetrope (a device used in the 1800s as a precursor to 2D animation) in the fact that successive frames are illuminated one at a time to create the perception of motion in the image. Rather than a simple 2D drawing, however, each frame is a separately exposed hologram. Each exposure is of the same object (in this instance, an MIT class ring) rotated at different angle relative to the hologram plates. These plates are all fastened to a mechanical wheel that is rotated manually by a crankshaft handle. A viewing window is attached to help the viewer isolate a single frame at a time. Finally, to make the motion of the image as smooth as possible, each hologram is illuminated for a small fraction of time using a super bright white LED connected to a photo interrupter circuit calibrated to the perfect position of each plate.

While the resulting image is only a looped one-second clip (much like today's .GIF images used frequently in text messages and social media), the perception of motion is there while still preserving the 3D depth information from the holograms. Much like how the zoetrope evolved into 2D animation using film strips, the principles appear to translate well to the realm of 3D using holography, and with holographic film already being very thin, the continuation of this project and its various applications are quite intriguing.

This project involved use of many skills, including optics and holography for the actual holographic exposures, CAD modeling and physical fabrication of the wheel apparatus, and electronic circuit design for the strobe light circuit. It even borrowed some film techniques for choosing the proper amount of frames, and how the object should be moved for the stop-motion like hologram exposures. For more direct information on the build process of this project, see my page from the Sci Fab 2019 website.